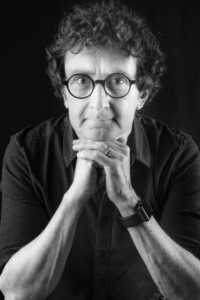 Giangiacomo Rocco di Torrepadula (born in Naples, 1966) is a visual artist and photographer. His work focuses mainly on the themes of hatred and prejudice, in particular concerning race.

Before becoming an artist, Giangiacomo was a serial startupper in the digital health space. He also lived in San Francisco, where he was able to witness from the inside disparities and racial discrimination.

It was a shocking experience, that led him to investigate these issues with the "Blind Sight" project, not only with an historical and sociological approach, but also from the point of view of the  behavioural neurosciences. An unprecedented approach that he is carrying out internationally, to explore the mechanisms which can lead stereotypes and prejudices (1), to even turn into hate crimes (2).

Aware of how much a lack of empathy is the key problem in all "ingroup-outgroup" relationships, the author's goal is to raise awareness about the problem by arousing interest in it(3).

He made his debut in the early 2000s with two solo shows curated by Lanfranco Colombo, one of the greatest exponents of the history and diffusion of Italian photography.

Philippe Daverio inserts him in his book "13x17: 1000 artists for an eccentric investigation of Italian art" published by Rizzoli (2007).

In 2022 he won the prestigious New Post Photography Award from MIA - Milan Image Art Fair, the most important Italian fair dedicated to art and author photography.

He started a participatory mail art project entitled "A Postcard for Floyd" which already has over 350 contributions from people in the world of art and culture and from activists on racial issues. The project was presented at the last Centrale Festival 13 in Fano (2022). He exhibits his "Cages" architecture photos at Genoa Design Week 2022 in the ancient convent of Santa Maria di Catello.

He lives in Franciacorta where his studio is located and works all over the world.

(1) It takes 100 milliseconds of exposure to a colored face (not enough time to consciously notice the image) to activate the most emotional part of our brain (the amygdala). See Robert Sapolsky - "Behave"  ed Vintage 2017 p.85
Fiske-Taylor provide a review of studies demonstrating the involvement of the emotional part of the brain in racial prejudice - "Social Cognition " - ed Apogeo 2009. pp 378.
(2) Hate is intended in its scientific definition as "the desire to remove a whole group because of an actual or perceived clash of worldview (called intergroup hate)" - Matthew Williams, "The Science of Hate" ed. FF 2021 p.17.
(3) The lack of empathy - defined as the ability to identify the emotions and suffering of others - is one of the main causes of dehumanization, which leads to racism. The empathy can be increased by being taught (hence making culture). There are several studies about this. Among others, see "Improving intergroup relations: the effect of empathy on racial attitudes", Walter G. Stephan and Krystina Finlay in Journal of Social Issues, vol 55, n.4 1999 p729-743. The study also highlight how intergroup empathy may improve by better explaining to people in opposite groups the reciprocal suffering.